How to dispute your worries as a Mum…

For a lot of Mums, anxiety is our middle name. We worry about everything, whether they’re eating right, growing properly, developing at the average pace, behaving well and sleeping well. There’s a lot of responsibility on our shoulders and sometimes we can get totally overwhelmed when we think things are going wrong.

I had a conversation with another mother this week (we’ll call her ’Sarah’) who was struggling with anxiety over the development of her son. She was worried his speech wasn’t coming on as much as it should which led to other worries about his growth. She’d got herself into a nasty cycle of worry that had left her anxious of spending time with him as he was the ‘cause’ of the anxiety – even if the cause was born out of love and genuine concern for him.

As an outsider, it’s easy to say “He’s fine – all kids develop at their own pace”, but it’s not enough for many just to hear that – not even from the professionals – we need to make ourselves believe it.

So I ran through a little exercise with her, one that was initially developed by Martin Seligman from his “Learned Optimism” book. (I recommend having a skim read of this – it’s an interesting take on optimism and not quite what you think).

The problem lay with Sarah taking one worry and exploding it into becoming bigger than it was and affecting every area of life. Rather than it being a blip, she had ruminated on it, making it become something that was not only influential towards other worries but permanent in her own thinking. She didn’t think it would, or could ever change.

So if you find yourself being anxious after adversity or when something happens to knock you off your perch, try this little activity.

Using Sarah’s example above, she didn’t think her son’s speech was developing at the speed it should, so firstly she started worrying that there was something wrong with him, then it meant he would permanently be behind and finally her thoughts meant any delay would be disastrous to his future.

I helped her understand how to use the “ABCDE” approach to this kind of thinking, so for every reason she gave herself that is negative i.e:

“He’s not making words yet”, counteract it with three reasons that statement is not true, so for example: (and remember, these are examples and wouldn’t be specific to every child)

If three is not enough each time, then add more. When you look for counter-arguments, I guarantee you’ll find lots and if you genuinely don’t, those are the times to ask the professionals for support and reassurance.

B – Belief – (the belief that comes from the action/adversity – your immediate negative thoughts) – “There’s something wrong, He’ll be behind forever, This will ruin his future”

C – Consequences – (the behaviour the negative belief creates in you, i.e. anxiousness) – Anxiety, feelings of failure, avoidance of child as contact makes her feel further anxiety.

D – Dispute – (the disputation process of internally arguing against the original negative belief.) – “Nursery confirm his development is fine, he’s definitely making efforts to communicate with his voice, he’s been saying certain words for months”

E – Energise – (the positivity that arises from the disputation process) – When you genuinely counter-argue your belief and help yourself to realise the truth, it energises you – remember this feeling and write down what it means and feels like to you. – For Sarah, this meant relaxing and believing the professionals when they said that all children develop at their own pace and she was able to spend more time with him without being anxious.

I also like to add an ‘F’ personally – which is ‘Follow up’. This covers 2 elements – firstly, keep learning! Don’t be afraid to take on board new techniques from friends, relatives and professionals to encourage development in this case. Also, keep checking in with yourself, keep looking for those disputes to prove the original belief wrong. Backing up your disputation with positive reinforcement will help it to stop re-occurring.

So there you go, a very simple tool to help you fight those negative beliefs that hold you back. Just go back to your child’s alphabet cards – ABCDEF!

Welcome to my blog! 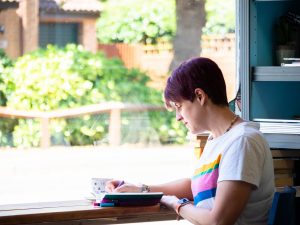 Here, you’ll be able to read my latest articles on positive psychology, cycling, being a mum, working for yourself, coaching and everything in-between!